Hello to all the followers of CPBC,

Well it has come to the end of the outdoor season, let’s be honest, weather wise we could not have had it better.  The green at CPBC survived well and to be fair did not play bad at all, yes, at the heads there was the obvious wear and pitting but mid green it was ok, fair play to the town council when the green was in dire need of water they relented and used a quarter sprinkler system, we do not get any water put on the green until the splash pad in the park is in operation and then only after the flowers throughout the town have been irrigated with water from the holding tank but hey ho we survived.  We will post the competition winners list when we have the final results.  All in all as a club we had a reasonable season there were not many friendly games cancelled and most league games were played on time, the club comps were eventually completed.  The winter work for the green started on Tuesday Sept; 27th, the council green keepers worked really hard and I believe the work was completed within the week, so thank you Peter and Bob.

Next year is out Centennial year so there is an awful lot of organising being carried out to hopefully make it a year to remember, there will be lots of celebration games hosting visiting organisations and clubs, a full fixtures list is almost complete along with a centenary booklet.  There will be a new club strip the cost of which will be discounted to existing club members and it is a good deal believe me.  The club house is to have a full refurb including the bar so please if you want to be part of this, become a member by contacting the secretary, details on under Contact Us.

We will say cheerio and all the best, many thanks for visiting the site and keep visiting as you never know what might be posted. 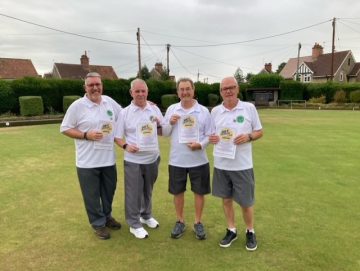 Let us start this CPBC chat with a big thank you to all those involved in making this day a very enjoyable occasion.  Thanks go to, in NO particular order;

We were lucky with the weather, the day stayed dry, the green played well although it has suffered with all the dry weather.  We played in triples, four games of six ends plus semi final and final.  By the time the four rounds of six ends had been completed it was just after five o’clock and our food had arrived, a choice between Fish or Sausage accompanied by Ooooh Yesss Chips, that completed the first half of the raffle got underway then back on the green for the semi final, teams were; (K Jefferies, F Mogford, G Mitchell) verses (K Wilkins, A Greenland, G Hubbard), a very close game was to take place arriving  at four all at end four, end five produced a one shot lead for A Greenland and team, so, into end six, now this was a nail biter but there has to be a winner and that was, A Greenland, K Wilkins and G Hubbard, congratulations awarded, cup presented and photo taken, back in the club to complete the raffle.  The history of the Hardenhuish Cup is that it was presented to CPBC by Mrs D Tinson in memory of her late husband Les, you may have guessed these were Gerry Tinson,s parents.  It was a cracking day and we are all proud to be part of CPBC and enjoy supporting its social games, friendly matches, league matches plus all general entertaining nonsense that ensues.

To all our followers, Take care Stay safe and bowl well. 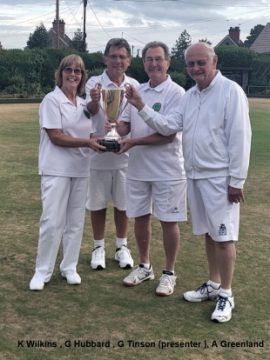 Ladies and Gentlemen. A big welcome back to all members old and new.

Firstly I would like to thank the outgoing President Stewart Allison and his committee who guided the club through probably one of its most turbulent periods. Hopefully from this season onwards we can get back to some normality.

Welcome back to all the new members we had last year and I hope that you now feel confident to put your names down for friendlies there will be plenty of opportunities for you to do so. Then of course there is the club competitions, all new members should play in these you may not win but it is a learning curve. If you are not happy with anything please contact any committee member and they can sort it out for you. Secondly best wishes to Captain Phil Collier and Vice – Captain Becky Gale and I hope you have a successful season Please give them your support.

With our Centenary fast approaching in 2023 please keep an eye on the notice boards for any information relating to next year.

All that’s left for me to say is enjoy the coming season, enjoy the club but most importantly of all enjoy yourselves. 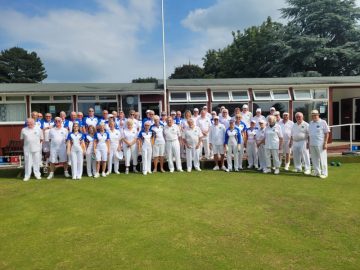 A superb game played in the right spirit

Thank you to the three Gentlemen that gave us a warm welcome on our arrival to have four sets of Bowls tested, it was a hour or so of good humour coupled with a touch of mickey taking.  they kindly explained the process and we watched with interest as they tested the bowls and made the necessary adjustments.

This website uses cookies to improve your experience while you navigate through the website. Out of these, the cookies that are categorized as necessary are stored on your browser as they are essential for the working of basic functionalities of the website. We also use third-party cookies that help us analyze and understand how you use this website. These cookies will be stored in your browser only with your consent. You also have the option to opt-out of these cookies. But opting out of some of these cookies may affect your browsing experience.
Necessary Always Enabled
Necessary cookies are absolutely essential for the website to function properly. These cookies ensure basic functionalities and security features of the website, anonymously.
Functional
Functional cookies help to perform certain functionalities like sharing the content of the website on social media platforms, collect feedbacks, and other third-party features.
Performance
Performance cookies are used to understand and analyze the key performance indexes of the website which helps in delivering a better user experience for the visitors.
Analytics
Analytical cookies are used to understand how visitors interact with the website. These cookies help provide information on metrics the number of visitors, bounce rate, traffic source, etc.
Advertisement
Advertisement cookies are used to provide visitors with relevant ads and marketing campaigns. These cookies track visitors across websites and collect information to provide customized ads.
Others
Other uncategorized cookies are those that are being analyzed and have not been classified into a category as yet.
SAVE & ACCEPT