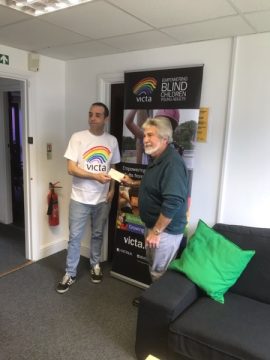 (Visually Impaired Children Take Action), Phil presented a cheque for £1000 to the representative of VICTA, this is a charity that Phil plus members and visitors to CPBC have contributed to throughout the season.

Also included was a donation of over £700 collected by Dave Williams for the marathon NO HAIRCUT since,  I think, April,  they have both done extremely well.

The charity VICTA is based in Fenny Stafford, Near Milton Keynes.